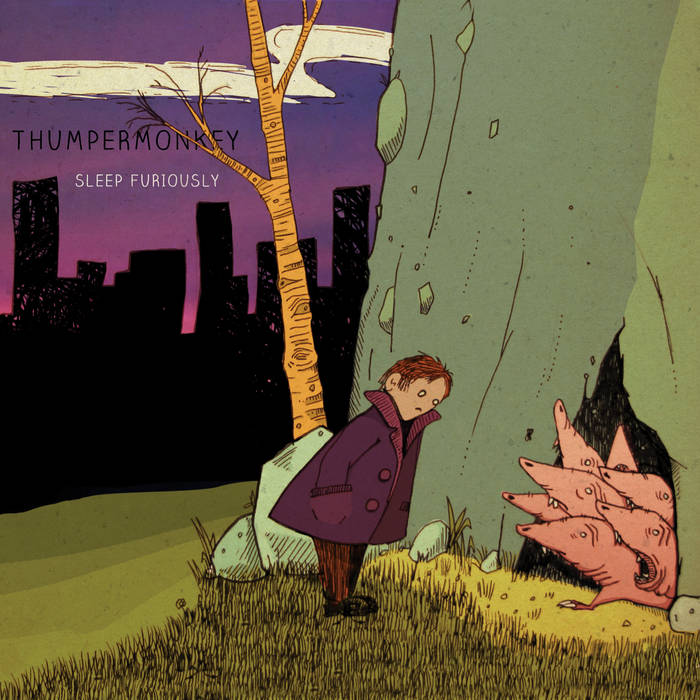 Finbar 4/5 - Thumpermonkey manage to be innovative, dissonant, melodic and brilliant all at the same time, with some At the Drive-In, Oceansize and King Crimson thrown in there. An absolute hidden gem of a band, just listen to Wheezyboy for proof. Favorite track: Wheezyboy.

Jamie (Audio Antihero) This makes me miss South London. I love this record, even more so than the amazing previous EP. "Wheezyboy" is the star of the show for me. Favorite track: Wheezyboy.

“…their often bewildering mastery of everything – King Crimson like angularity and dissonance, the blissful pop dynamics of the Cardiacs, and the esoteric post-hardcore audacity of Shudder to Think – amount to a sustained victory for intuitive cross-pollination…most importantly, Thumpermonkey’s music is ridiculously exciting; the blazing light of punk rock filtered skilfully through the cerebral prog prism…”
PROG MAGAZINE

“It’s hard to see past how good the music is, to how hard it was to make, which is just as it should be, because it never really matters how technically demanding an artwork is to conceive or execute. What matters is the effect it has on its audience; for this small particle thereof, truth is beauty, beauty is truth, and Thumpermonkey’s latest album is amply provided with both.”
OLIVERARDITI.COM

“Thumpermonkey are not a normal band. In fact, listening to their new record, “Sleep Furiously”, I’m not entirely sure if they’re in any way normal people….a mighty impressive job, and no mistake. (8/10)”
SUBBA-CULTCHA

“With each passing release they’ve matured and sophisticated their song craft to a point where the comparable doffing of musical caps can be made with the heavyweights new and old of the progressive rock fraternity.”
GOD IS IN THE TV